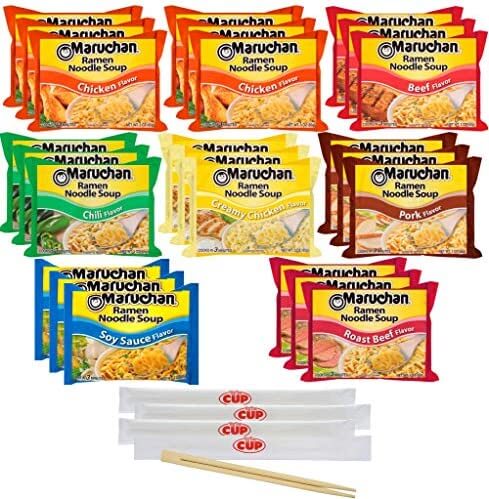 Japanese cuisine is widely known for ramen, an adaption of Chinese wheat noodles soups. Although, more recently, ramen has become one of the top dishes commonly consumed in Japan,

Traditionally, ramen is served in soy sauce or miso-flavored broth and garnished with seaweed, scallions, bamboo shoots, and sliced pork. However, a Taiwanese-Japanese man, Momofuku Ando, came up with a modernization of the traditional ramen known as instant ramen noodles, which he started producing in 1958 under the license of Nissin Foods, the food company he founded. This innovation allows for faster and more convenient preparation of ramen noodles, as it only requires the addition of boiling water, and your meal is ready.

What happened to Maruchan Ramen? Why was it discontinued?

There are several explanations for what happened to Maruchan ramen and why it was discontinued. But we have been able to pinpoint what happened exactly.

Here it is: Contrary to words from the rumor mill, Maruchan ramen has not been discontinued, at least not completely! Instead, the Maruchan ramen noodles manufacturing company has been struggling with supply chain problems, making it extremely difficult to keep up with customers’ demands. This, unfortunately, made many grocery stores and retail chains drop Maruchan for other brands that can meet customers’ demands.

Read also: Why Was Viniq Discontinued?

Where does Maruchan Ramen come from?

Maruchan ramen is originally Japanese, formerly produced and imported from Tokyo, Japan. In 1977, the Maruchan Company started making ramen in California. Presently, they have about four ramen noodles manufacturing facilities in America.

What does Maruchan mean in Japanese?

In Japanese, “Maruchan” combines two words- Maru and Chan. “Maru” means round or rounded, like a ball’s shape or a happy child’s face. The second word, “Chan,” is an honorific that portrays affection or endearment for a child and is often a suffix attached to the child’s name.

Read also: How to Open A Pillsbury Can

Are Maruchan Noodles bad for you?

Generally speaking, eating instant ramen noodles regularly may be bad for you because they lack essential nutrients that the body requires for proper functioning, such as fiber, proteins, calcium, potassium, vitamin C, vitamin A, etc.

In addition, instant ramen noodles like Maruchan noodles are loaded with carbs, sodium, and flavor enhancers like monosodium glutamate, which has been linked to symptoms like nausea, headaches, tight muscles, and high blood pressure.

They also contain preservatives such as tertiary butylhydroquinone, commonly known as TBHQ. TBHQ, although considered safe in small doses, has been linked to an increased risk of lymphoma, neurological damage, and liver enlargement when ingested in large amounts.

Here are some ways to improve the nutritional profile of your ramen.

Is Nissin or Maruchan better?

Most ramen lovers judge ramen with two major criteria: The ramen noodle and the soup or broth (which is largely influenced by the seasoning pack).

When looking at the ramen noodle, we consider the texture of the noodles. Ramen noodles with great textures can absorb the flavors of the soup, seasonings, and other added ingredients without becoming soggy quickly. On the other hand, when considering the soup or broth, it should have a great taste and not look cloudy.

According to popular opinion, Nissin offers springier ramen noodles and richer broth than Maruchan, probably because they have been around longer than Maruchan and have had a lot of time to apply changes and develop their products to suit consumers’ tastes better. However, many people are concerned that the ingredients used in Nissin’s ramen seasoning are not as healthy as the ones used in Maruchan seasoning.

Which is Better – Top Ramen or Maruchan?

Top ramen is a ramen noodle brand produced by Nissin Company. Many ramen lovers believe Top ramen has springier ramen noodles and richer broth than Maruchan. This is probably because they have been around longer than Maruchan and have had a lot of time to apply changes and develop their products to suit consumers’ tastes.

However, many people are concerned that the ingredients used in Nissin’s Top ramen seasoning are not as healthy as the ones used in Maruchan seasoning. A few ramen lovers believe that Maruchan has better soups while Top ramen has better noodles.

Considering what happened to Maruchan ramen, you may not be able to get Maruchan ramen from your local store for this recipe, but you can use another ramen noodles brand you like.

Of all the ramen recipes, we have found that one recipe stands out – Tiktok Ramen! Unlike most ramen recipes, tiktok ramen is a broth-less or soup-less preparation of ramen noodles. In addition, you get to ditch the seasoning that comes in the ramen pack and use your preferred seasoning (which is one of the best ways to enjoy ramen noodles if you ask me).

The below measurements will make about 3 tablespoons of everything but the bagel seasoning.

Directions for everything but the bagel seasoning

But irrespective of what happened to Maruchan ramen, there are other great brands available in the market today that you can still choose from. You will find different brands you like better than Maruchan. However, remember to limit your consumption of ramen for your health.