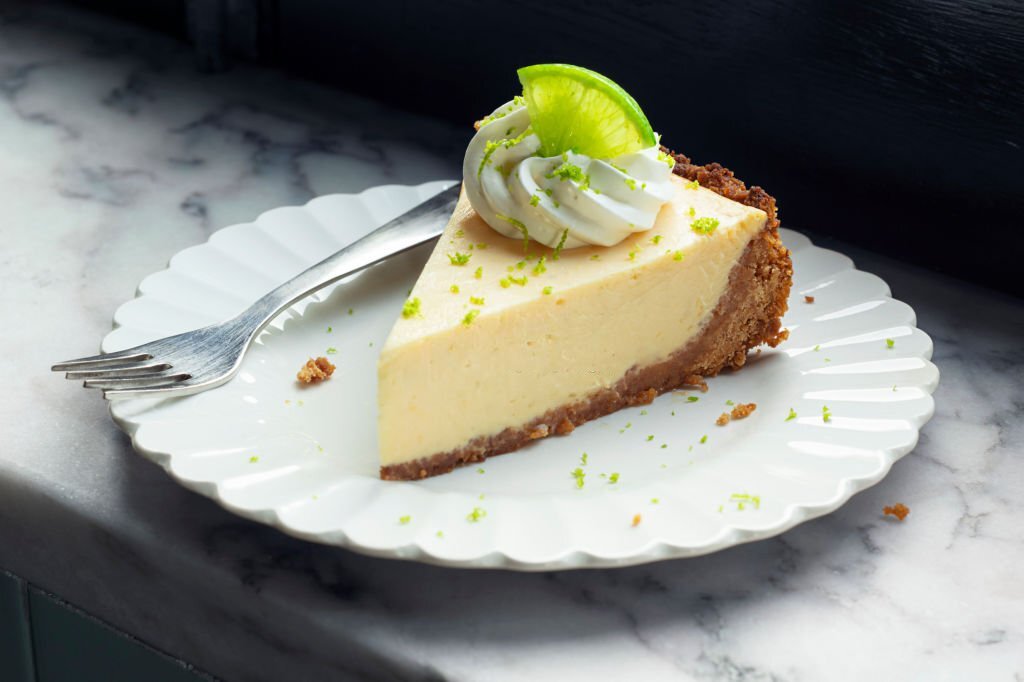 Key lime pie is famous for being Florida’s official state pie as it was declared so in 2006 by the Florida legislature. The pie is said to have originated from Key West in Florida State around the late 19th century. You can easily find key lime pies in virtually all the restaurants across the Florida Keys. You can even make them in your kitchen!

Key lime pie is an American dessert, usually made up of graham cracker crust (in some cases, pastry crust) and a custard filling that consists of egg yolks, key lime juice, and sweetened condensed milk.

Although we now have numerous variations of key lime pie, I will show you a fail-proof recipe for key lime pie that you can try out in this article. It is so easy to make that you will no longer have to take a trip down to the restaurant to have a taste of your favourite dessert.

If you haven’t had key lime pie before, I bet you would want to know what is so special about this pie. What does key lime pie taste like, and why is it so good that it is named a state’s official pie? Let us see (or, in this case, read) for ourselves, shall we?

A well-made key lime pie taste like something out of this world, so yummy that you’d want to have a second helping. With a crunchy crust and a sweet, tangy, and citrusy filling that perfectly blends with the sweetness and tanginess of key lime and the sweetness of condensed milk, key lime pie tastes so good that it has retained its position as Florida’s official state pie.

If you don’t know what key lime pie taste like, I suppose you have never eaten key lime pie before. Well, the pudding taste is in the eating.

What is key lime pie?

Key lime pie is named after small aromatic limes, known as key limes, which are native to the Florida Keys, a group of tropical Islands located off the southern coast of the state of Florida, United States of America. Unlike the regular Persian limes, which are more common, key limes are yellow when ripe, smaller, and more aromatic.

Key lime pie is an American dessert, usually made up of graham cracker crust (in some cases, pastry crust or no crust at all) and a custard filling that consists of egg yolks, key lime juice, and sweetened condensed milk. Key lime pie filling is usually yellow, not only because key lime juice is yellow but mostly because of the egg yolks added.

In the past, key lime pie filling was made similar to magic lemon cream pie; this involved mixing all the ingredients thoroughly without cooking, making the egg proteins react with the lime juice acids and condensed milk. Without baking, the mixture curdles and thickens.

However, key lime pies are usually baked in recent times to pasteurize the eggs and further thicken the filling. While you can serve key lime pie without topping, you can also top it with a meringue topping (prepared using egg whites) or whipped cream, if you want.

Also, some people use the regular limes in the absence of key limes, but of course, they’d be missing out on the signature tart but sweet key lime flavour that gives the key lime pie its uniqueness.

Why is key lime pie so good?

Many people enjoy key lime pie and think it’s so good because of its unique key lime flavour and a pleasant combination of the sweet and tart taste.

We have mentioned previously that key lime is the distinguishing ingredient of key lime pie. However, the addition of sweetened condensed milk adds a creamy, smooth, and delicious feel to what key lime pie taste like.

Why do they call it key lime pie?

What is the texture of key lime pie?

The texture of key lime pie varies from one part of the pie to another; the base or crust is crunchy, while the filling is jiggly but firm to touch.

No, key lime pie is not cheesecake. Although both are made with eggs, key lime pie contains key lime juice and condensed milk alongside the eggs, while cheesecake has sugar and cheese added to the eggs.

What is the difference between key lime pie and lime pie?

Which is better between key lime and lime?

Whether or not key lime is better than regular lime depends on the recipe. Suppose your recipe calls for key lime, and you use lime instead. You will likely have a different taste or flavour than when you use the exact type of lime stated in the recipe.

So that you know, key lime and lime may come from the same citrus family. Still, they differ in appearance, taste, flavour, etc., making each lime variety better suited for one recipe than the other.

Yes, key lime tastes different from regular lime. Key lime is sweeter than lime, as its acidity reduces significantly when ripe, making it more aromatic and less tart than the regular lime.

Can you substitute regular limes for key limes in pie?

Yes, you can substitute regular limes for key limes in a pie. However, you’d be missing out on the signature tart but sweet key lime flavour that gives the key lime pie uniqueness.

Earlier, I promised to share a fail-proof recipe for key lime pie that you can try out. Here it is:

You can refrigerate your key lime pie for three days. However, as it does not contain preservatives, key lime pie should be consumed within three days of preparation while stored in the refrigerator for the duration.

Ensure that your key lime pie does not come in contact with other foods in your refrigerator, as that could make it go bad quickly.

Can you freeze key lime pie?

Yes, you can freeze key lime pie. Frozen key lime pie will remain safe for consumption for up to three months, provided you store it in a freezer bag or an airtight container.

How long can key lime pie sit out?

Therefore, you should discard your key lime pie if you have left it at room temperature for more than two hours.

You must try key lime pie if you love sweet desserts like me. Key lime pie tastes like nothing you have ever had. So cool and refreshing on a hot day- it’s a perfect summer treat for you and your family. I can’t wait to hear how yummy your key lime pie tastes if you make it this summer!