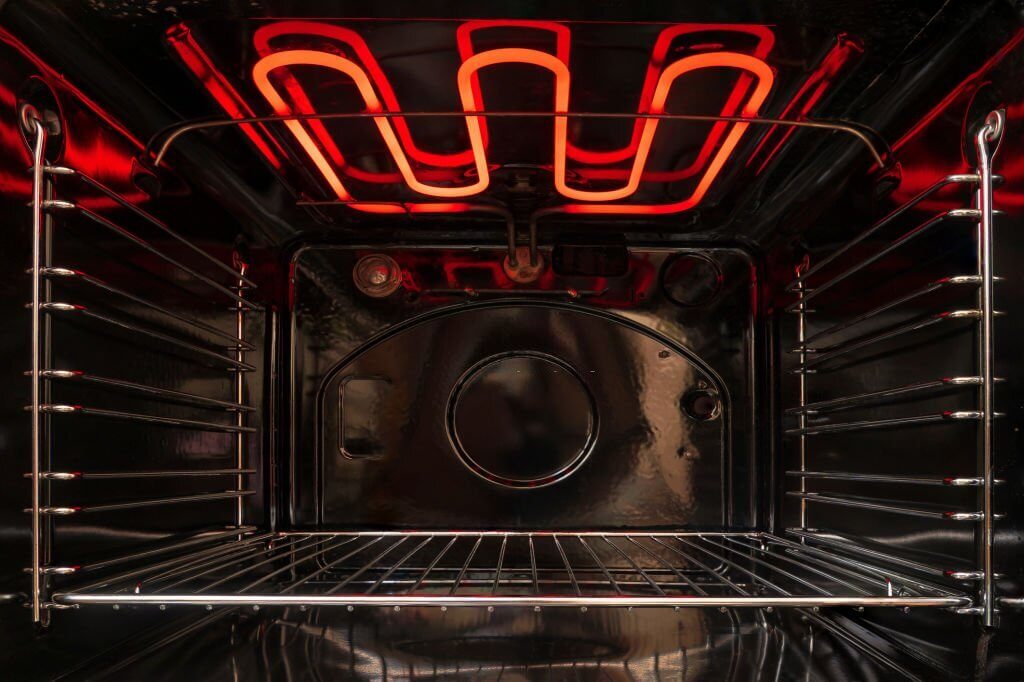 The first step to baking the perfect treat is preheating the oven to the right temperature. Once you get this right, you’re off to a good start. Preheating is often straightforward, but sometimes, it could give rise to cause for alarm. Especially when smoke starts to come out of the oven.

If this has ever happened to you and you are wondering what caused it and how to prevent it, this article is for you. Stick around!

Why is smoke coming out of the oven while preheating? – Possible reasons

If smoke is coming out of your oven while preheating, it could result from a severe issue, but more often than not, it is often a slight issue- like an oversight. So let’s explore a couple of possible reasons for the smoke.

A smoking oven is (very commonly) caused by residual food particles in your oven burning up while you preheat. This can happen, especially if you sometimes forget to clean your oven after use. In addition, rogue food particles can stick to the oven, which ends up causing a bit of smoke. Mystery solved!

If your oven’s gas pressure is too high, it can produce a remarkable amount of smoke. This happens when the flames reach the oven racks, mostly with gas ovens.

Whenever you get a new oven, you are advised to operate it empty at least once before you begin baking with it. This is so that the factory coating burns off completely. If you didn’t know this, you might be shocked to see smoke from your new oven while preheating it. The factory coating gives off smoke when it burns off, which could be why.

If your oven is not new, and you’ve cleaned it properly, it might be faulty or broken. On the other hand, you may be having issues with the heating element or something else.

What to do if smoke is coming out of the oven while preheating? – 5 things you should try

If smoke comes from the oven while preheating, you first need to turn it off and let it cool down. Afterward, try out any of these 5 things.

If smoke is coming out of the oven due to residual food particles, then wiping it with a damp towel might fix the issue. Ensure you remove all food chunks or grease and thoroughly clean your oven before you start it up again.

Remove any residue from the cleaning agent.

If you used a chemical to clean your oven, it might be causing the smoke. To fix this, wipe your oven floor, roof, and sidewalls with a damp towel to get all the residue out. Also, avoid commercial cleaning products if your oven already has self-cleaning mode.

You can replace faulty heating elements.

If you ever notice smoke coming out of your oven while preheating, it might result from faulty heating elements. If you want to be sure about it, you can turn off the oven and turn it on again.

If the oven doesn’t glow red while in bake mode, there’s a high probability that you have a faulty heating element is faulty and need toreplace it. You should make the replacement as soon as possible to prevent further problems with the oven.

High gas pressure is caused by the improper conversion of the oven and can lead to the emanation of smoke from your oven while preheating. This happens when taller and hotter flames are generated from the burner.

You can consult the installer to help correct the gas pressure to prevent the emanation of smoke and fire outbreaks when using your oven.

When purchasing an oven, it’s normal to see smoke when used for the first and second time. However, you can stop the emanation of smoke by burning off factory coatings.

To burn off factory coatings, ensure the oven is cool and there’s no pot or pan in it. After that, you set it to “bake” at a temperature of 400°F-600°F and leave it for some time. When you have done this, your oven should not produce smoke when used subsequently.

Should an Electric Oven Smoke So Much? Possible reasons why

As stated earlier, it’s normal for your electric oven to smoke when it’s new. However, it should smoke too much. When your Electric Oven smokes so much, it signals that some of the heating elements are wearing out.

If your electric oven is smoking so much, here are some of the possible reasons:

There’s left over in the oven after cleaning.

After cleaning your oven, there’s always a tendency to have leftovers from the cleaner you used. This is one of the reasons why your oven smokes so much.

This is also one of the reasons why your electric oven can smoke so much. Once the heating element in the oven is faulty, it causes the oven to malfunction and can lead to excessive smoke emanating from the oven.

How to clean a smoking oven

To clean a smoking oven, turn it off and let it cool completely. After that, you can use a dampened towel to wipe off any cleaner residue or spills from foods. You should ensure that all oven parts are cleaned to prevent smoking after cleaning.

However, let’s suppose you have an oven that cleans itself. In that case, it’s advisable to avoid using chemical cleaners because they can damage some delicate parts of the oven, such as the enamel lining.

How to clean butter from the oven

If you want to clean butter from your oven after baking, you should do this. Make a solution of water and baking soda into a container and dip a scrubber into the solution. Use the scrubber to clean the butter off the oven walls.

After cleaning the inside of the oven, you can also use a dampened towel to wipe off the residue to prevent smoking.

How to prevent smoke when cooking

If you want to prevent smoke when cooking, you can do the following:

You can place your pan or pot on fire before adding oil to it.

You should ensure proper and regular cleaning of your oven and other cooking utensils before and after use.

You can reduce the gas pressure of your oven or your cooker’s temperature while cooking.

As stated earlier, you can replace faulty elements in your oven before cooking to prevent your oven from smoking so much.

You should remove food residues from your oven or cooker before and after cooking as this can also help prevent smoke.

How to use a gas oven for the first time

If you’re using a gas oven for the first time, here are some of the things you should put in place before using the oven:

Clean the interior and exterior parts of your gas oven with soap and water and dry thoroughly before using.

Turn on your gas oven ventilation and set it to “bake” at a temperature of 500°F. After that, let the oven heat for about 30 minutes before usage.

After 30 minutes, turn the oven off and allow it to cool with the door closed. When this is done, and after the oven is cool, you can now use your gas oven for the first time.

How to get smoke out of the house after burning food

Here are some of the ways you can get smoke out of your house fast after burning food:

The first thing to do is to get rid of the smoke source. After this, open the windows and doors to allow proper ventilation and clear out the smoke.

Another thing you can do is to place a fan by the window to get the smoke out faster or use an air purifier or diffuser.

You can boil lemons to eradicate the smoke faster or place multiple bowls of vinegar in the room where the smoke is coming from. Also, you can spray air freshener to mask the smoke.

How to get melted plastic off oven heating element

If you want to remove melted plastic from an oven heating element, you can place a bag of ice on the plastic and leave it till it’s hard enough before scraping it away.

Another option would be to heat the oven at a low temperature for some time. When the plastic is heated enough, scrape it away from the surface of the heating element.